Yesterday a press conference was held in Łódź on the planned refurbishment of Freedom Square. We work on this project with mamArchitekci. The City Mayor Hanna Zdanowska presented the concept, which is based on the the introduction of a large amount of greenery – this idea was accepted by the departments of the City Office and the Office of the Provincial Conservator of Monuments.

Plac Wolności in its present layout serves primarily as a transit space for vehicle traffic. However, it has great potential as an attractive public space conducive to the development and strengthening of the basic function of urban spaces: meetings. Therefore, it is proposed to change the traffic organization – to transfer the transit, road and rail traffic to the northern part of the square, and to allocate the central and southern parts to pedestrian and bicycle traffic, with occasional access. Freedom Square was established in the 19th century as the New Town square and the beginning of the Piotrkowska Route. Over the years, the buildings of its frontage have changed and the functions dominating in the square have changed, but the unique shape of the regular octagon has remained. It will be emphasized in the composition of greenery, paved surfaces and the arrangement of street furnishing, as well as the radial axes of symmetry. The most important objects of the square will be visible, including the viewing axes of four streets to the Kościuszko Monument. The views that open to people wandering around the square were also taken into account (creating view frames on individual buildings, limited by tall greenery).

In order to combine a number of different functions in one space, the project provides for the separation of several zones:
• Park zone (recreational, with the largest share of green areas and trees).
• Central zone, separated from communication by a green belt. It is an urban and representative zone with Tadeusz Kościuszko monument in the center, additionally emphasized by a fountain. Around the central zone, seats have been designed on walls delimiting the greenery, allowing the users to observe the central part of the square.
• Pedestrian routes – running around the square and along the extension of Piotrkowska, Legionów, Nowomiejska and Pomorska Streets. In the central part of the square, the pedestrian routes blend in with the surrounding floor planes, without any particular distinction. In the areas where traffic is allowed, the communication routes are separated from those parts of the square where car access is not permitted, by greenery, low walls or locally – by posts.
• The cafe garden zone, designed at the intersection of Pomorska Street, separated from the lane by greenery.
• Tram stop zone. The basic requirement for this part of the square is to provide passengers with safe and comfortable use of the tram transport. The accompanying greenery is to be a clear signal in space and to prevent accidental intrusions into the stops.

However, the biggest change in relation to the existing state will be the introduction of a large amount of biologically active areas and greenery. The problem of urban heat islands affects Łódź to a great extent – in summer, the heat affects everywhere where there is no greenery. That is why lawns, lawns, shrubs and lawns as well as 62 trees will appear on the square – in accordance with the standards adopted by the city, they will be immediately 8 meters high. The greenery will occupy about 20% of the entire Freedom Square area, allowing for the retention of rainwater. 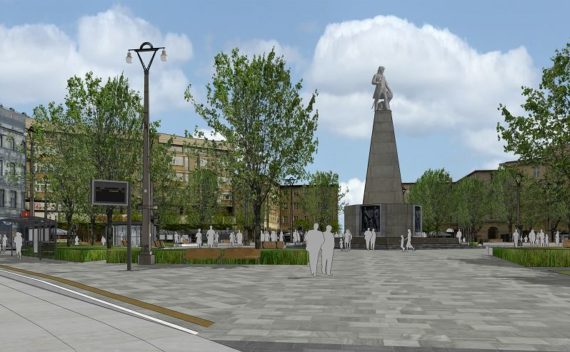 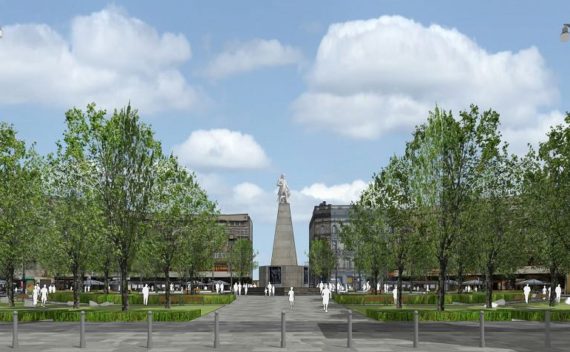 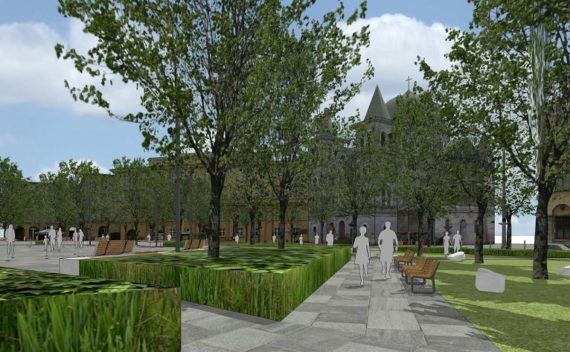 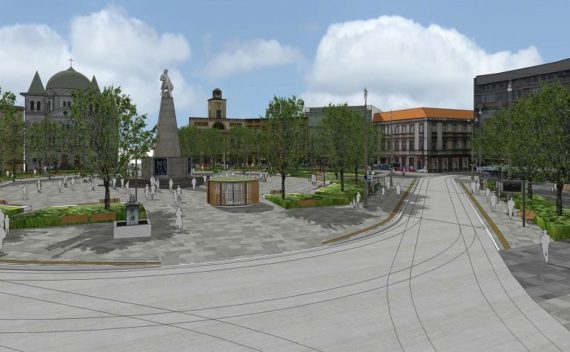