Opening of the woonerf
in Abrahama Street in Gdynia

This week, the pedestrian-friendly zone was opened in Abrahama Str. in Gdynia in the section between 10 Lutego Str. and Batorego Str. It is the implementation of the proposal voted by the residents in the civic budget.

This is the first woonerf in Tricity, a shared space that serves pedestrians, cyclists and drivers. We invited Bartosz Zimny ​​from Lodz, who has the largest experience in designing shared spaces in Poland, to cooperate on the project. Traffic organization in this section of Abrahama Str. has been turned into a one-way street (except for bicycle traffic, which is allowed in both directions).Vehicular traffic is allowed with a speed not exceeding 20km/h with priority for pedestrians, and parking can only take place in designated places. The number of parking spaces has been significantly reduced – cars used to occupy the entire length of the street. There used to be only tiny unpaved fields left for trees, that literally ‘strangled’ the greenery. That is why we have significantly increased the biologically active areas, planted and highlighted new acacia trees and created small lawns. Fortunately, it was possible to save one beautiful ash.

Observations from the first days after opening indicate that pedestrians actually walk along the central lane, the need for meandering effectively slows down the cars, and the lawns serve as a place to sit and picnic. The restaurants and cafes use the extended space along the buildings for umbrellas and tables, and Carmnik burger spot put up its food truck. We are waiting for the greenery to grow enough that temporary fences can be removed. 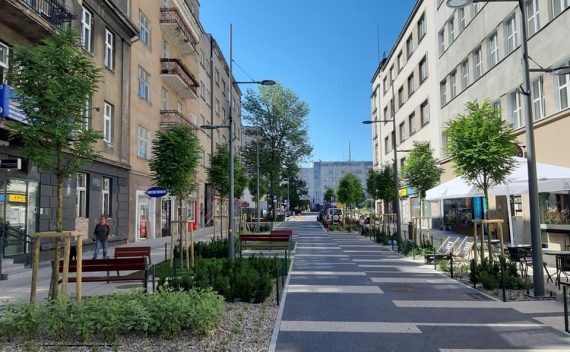